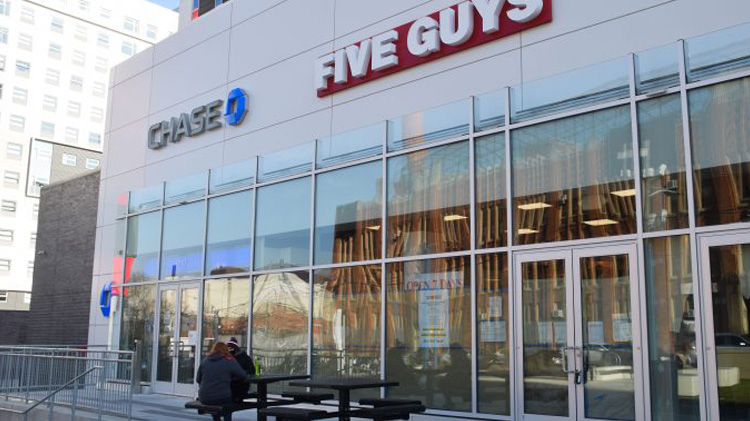 The restaurant officially opened its doors on Feb. 17. Its hours of operation are 11 a.m. to 10 p.m. every day of the week, said Teri Yago-Ryan, the vice president of communications at the Goldenberg Group, a regional development company which built and manages Vantage.

The franchise originally planned to open in the “latter part of 2020,” but the construction shutdown in March 2020 delayed the Five Guys’ opening, Yago-Ryan said.

“It would be a great fit and complement to our existing roster of great tenants including Chipotle, Potbelly [Sandwich Shop], Blaze Pizza and Old Nelson [Food Company],” Yago-Ryan said. “With a nice mix of retail offerings and CVS [Pharmacy] also on site, residents rarely need to go outside of the View, Vantage community for essentials and food favorites.”

“We do have a couple Temple kids who work here, but we’re hiring all over,” Peralta said.

Being on a college campus allows the business to have a large pool of potential employees, while also seeing familiar faces in and out of the shop consistently, Peralta added.

“It’s really nice to have this new restaurant on Temple’s campus,” Durkin said. “We don’t really have a good burger place besides Burger Tank, so it’s nice to have some options now.”

Dejuana Griffin, a manager at Five Guys, said this location allows the 984 students living in Vantage to be close to the restaurant.

Both Griffin and Peralta agreed that opening the new restaurant during the COVID-19 pandemic has not added any additional difficulties to the opening and hiring processes.

“The only challenge we’ve had is keeping up constantly with new employees in the store, a new rush and training new people,” Peralta said. “We’ve managed to work it out.”

“Once the pandemic ends, this place will be the go-to late-night snack for us,” she said.